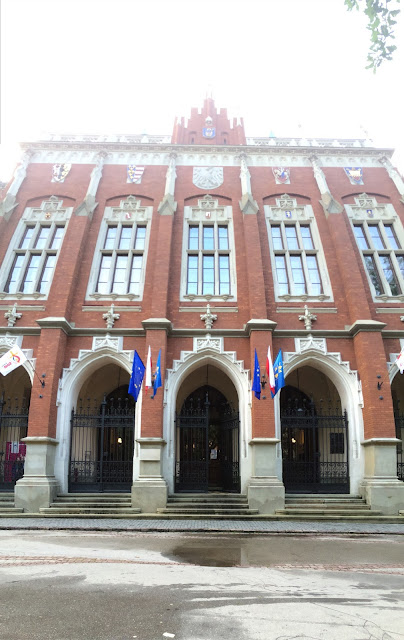 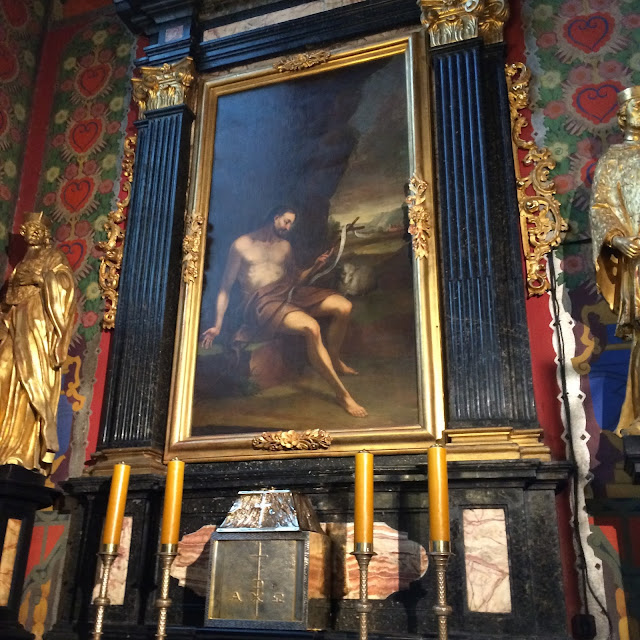 Friday was a wonderful day.  After getting some sleep (not too much!) we went out early to see some JPII sites: we went to the Jagellonian university where he was a student and later a professor.  Then we prayed at the huge Marian basilica that is in the downtown square.  I prayed especially for the parish whenever I saw John the Baptist, which was of course quite often!

We next made a quick visit to Blessed Pier Giorgio Frassati at the nearby Dominican church before heading to a morning Mass with Bishop Rhoades at the ancient church of Saint Michael the Archangel and Saint Stanislaw at the Skalka monastery. 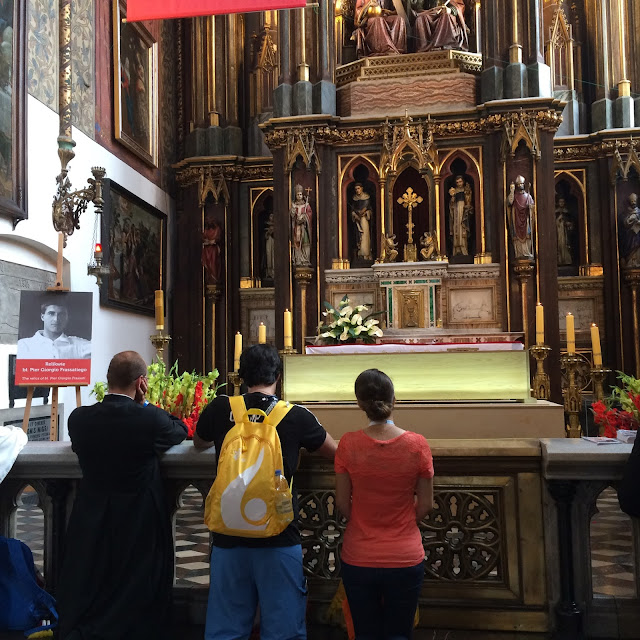 The not-very God-fearing king Boleslaw had the gall to come into the church and slay the bishop Stanislaw because he was excommunicated (probably for the right reasons!).  Anyways, he threw the body of the bishop martry into the stream nearby, and this is the origin of the fountain (the water is "drinkable" but very sulfuric - I learned the hard way!). 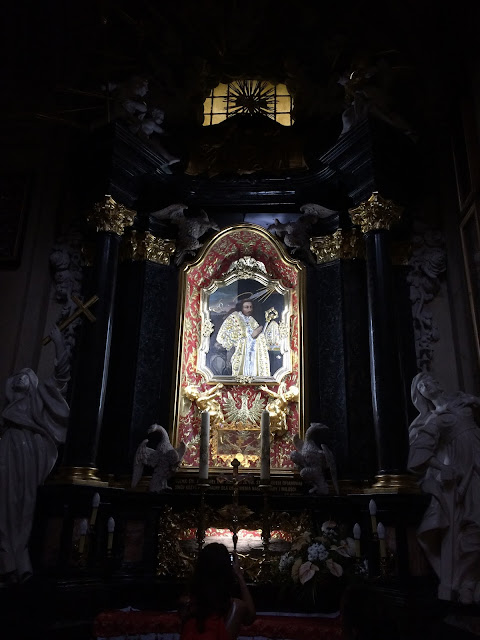 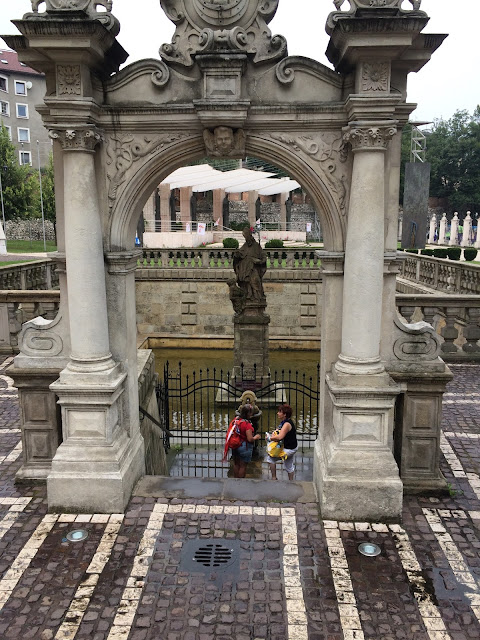 The Archdiocese of Indianapolis happened to be at the church and were hoping to find an English Mass that morning, so they were thrilled to join us.  Two of the pilgrims were my sister Katie and her husband Matt! (and their child in the womb!)  I was so happy to see them for the second time (I saw them Wednesday at the Tauron Arena with the 20K pilgrims there).  I had hoped I could hang out with them for the afternoon but it did not work out since we had different groups, etc.
I continued for the afternoon as a bit of a JPII tour: the Wawel Cathedral (he was Archbishop & Cardinal), as well as his first parish church, St. Florian's.  Then the four of us got a very nice (and huge) lunch at a restaurant and visited another church before making our way to the Blonia park again. 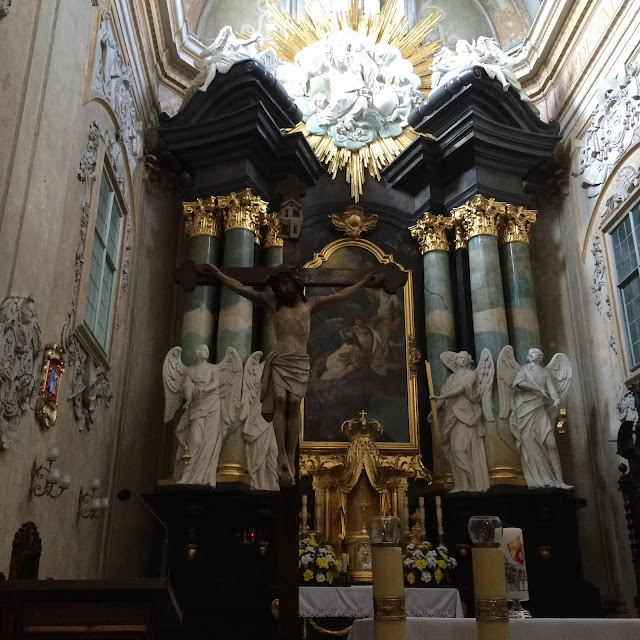 The stations of the Cross that evening were especially moving for all of us.  After Pope Francis arrived, we began immediately to enter into this tradition prayer that Saint Francis himself instituted some 800 years ago.  Each station was coupled with a work of mercy (corporal or spiritual), and each began with a  Gospel reading followed by a dramatic presentation of some sort to introduce the theme.  Then we read a meditation and a prayer, concluding with a video that showed how the Church was carrying out that work of mercy throughout the world.  The meditations were powerful. 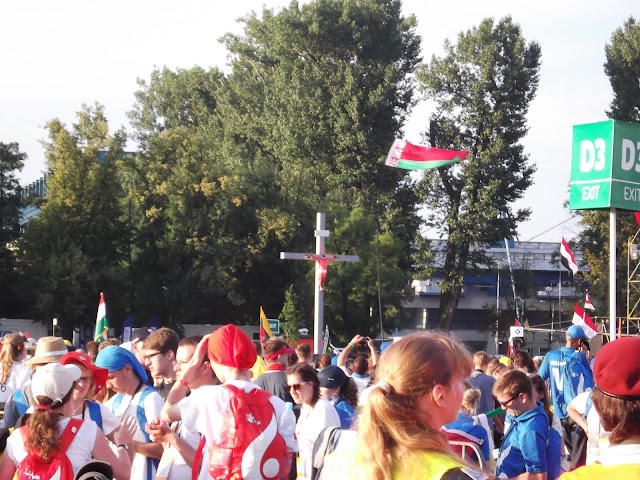 After this concluded, we started back for the hotel.  I however, broke off for a special treat: I went to see JPII's apartment where he lived for a couple years with his dad while he attended university.  (This was before he decided to enter seminary).
I was welcomed in after hours by a nice lady who had mercy on a nice young priest.  So I was able to see the place by myself and pray quietly there!

I also tried to see the nearby parish he attended, because he celebrated his first public Mass there as a priest.  However, I was not able to get inside, so I ended up going there early the next morning!
Posted by Fr. Terrence M Coonan Jr at 8:46 AM