Saturday morning was the last chance for a shower for the next 36 hours, and we all knew it.  After breakfast, the group met at 8am to head for Mass with Bishop Rhoades.  I however, went to see JPII's parish when he was a university student before entering seminary: St. Stanislas Kostka in the debniki neighborhood of Krakow.  It must have been a newer area, because the church has an architectural style that is more representative of the early 1900's. 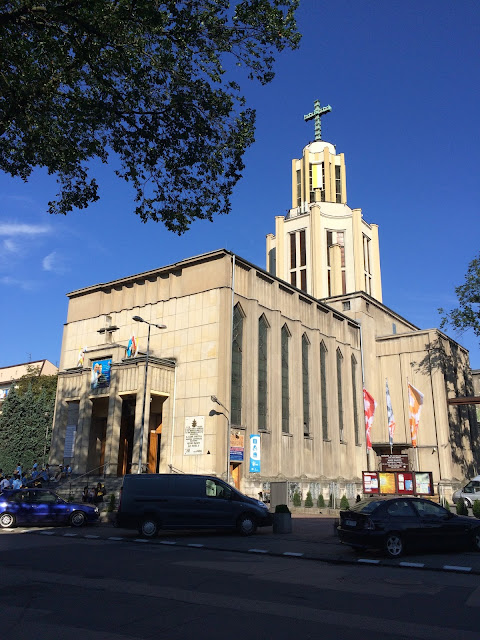 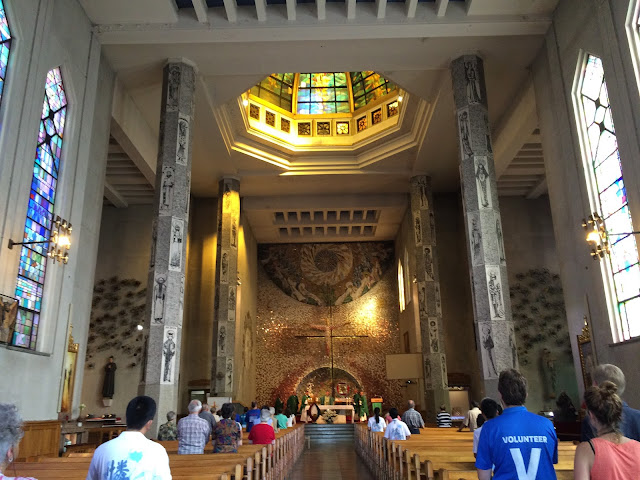 A cassock of Saint John Bosco (known as Don Bosco) was present in the church, and it was apparently ministered by his order the Salesians (perhaps since its founding).  I stumbled in during a Mass so was very reverent and inobtrusive as I made a quick view of the church.

Then I joined up with the group for the huge march to the "Campus Misericordiae," the field of mercy, where we would gather as a group of 1.6 million or more young Catholics from around the world.  It was about an 8 mile hike to get there.  I carried a portable "Mass kit" so that I could celebrate Mass for the dozen or so pilgrims from our group who decided to leave at 5:30am and get us really good spots!  Here I getting things ready.  A couple Polish girls (with blue headbands) joined us as well as three pilgrims from Michigan who wanted to attend Mass.  This was one of the neatest memories for me, because it is rare to have such a blessed opportunity to celebrate Mass outside surrounded by so many faithful who are on an international retreat pilgrimage! 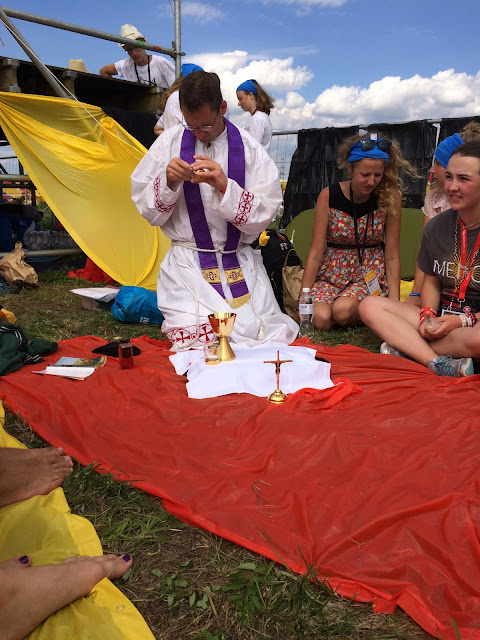 A miracle was that the music and sound tests were quiet during the Mass before picking up again around 5pm.  My sister Katie and her husband Matt found us and we were able to chat for a couple hours before Pope Francis arrived for a prayer service and a long sermon, followed by Eucharistic Adoration.  They passed out candles for all of us and the beauty of praying the Divine Mercy chaplet in that environment as Catholics from all over the world brings me to tears.  God is so good!  Jesus, I Trust in You! 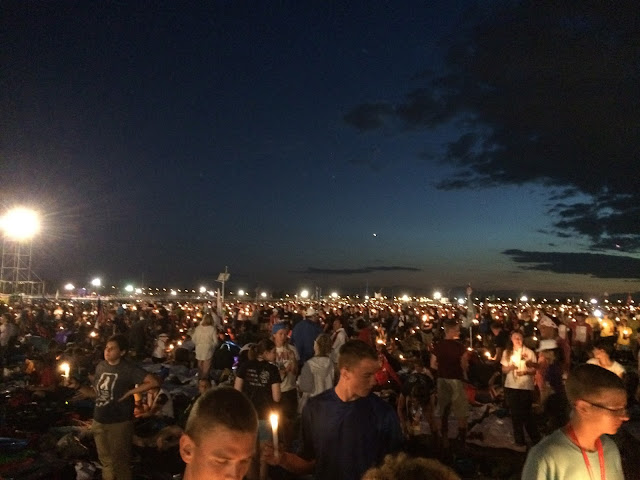 After Benediction, we bid farewell to the Holy Father for the evening, and had a concert until around 11pm.  I played cards with a few of our pilgrims, reminding me of how I learned to play that game at World Youth Day 2002 in Toronto with my high school youth group!  Then, bedtime under the stars!
SUNDAY MORNING, I had a rough time sleeping since I packed super light, so I was up before sunrise a little cold and wet.  I walked around to get out the shivers, and a young man from Spain came to me for Confession (en espanol, of course!).  Then I said my prayers and took photos of the beautiful sunrise.  I hope this photo gives a small sense of the wonder of the experience.  It's hard to describe how "at home" you feel in circumstances that would normally terrify most people, but it's the beauty of all being there for God and God alone.  Amazing to have such a "family" in the Catholic Church.

It warmed up quickly.  The other priests of my group rushed out to get us a spot for Mass, since they were afraid of things not working out (with reason, since in Madrid 2011 it wasn't as smooth of a trip).  I eventually joined them, and we all got special chasubles for the event.  With some 2,000 bishops, you can only imagine how many priests were there.  It was a long way to the altar from our seats! 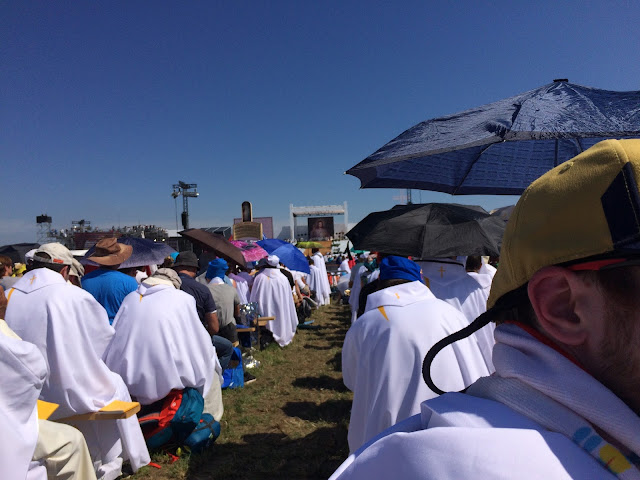 Pope Francis returned for Mass after driving through the Campus and saying hello to everyone.  Mass was at 10am and was a beautiful ceremony.  The story of Zaccheus climbing up the tree to see Jesus gave Pope Francis opportunity to remind us that Jesus wants to be with us, with you, with me, to come to your home and to dwell with you and be with you, even though we could never deserve it or earn it.  That is mercy.  Jesus shows us and the Pope reminds us.
After the Mass (mostly in Latin, our universal language), we headed back in small groups for our hotel.  It's quite an operation to see: almost 2 million people walking on foot out of the huge field.  Thankfully a storm came through to cool things off without dropping rain on us until the very end (I got inside 20 minutes prior!)

Around 5pm Pope Francis drove past the hotel, so a small group of us were out there to say hello, and I spontaneously gave him a blessing myself, as a priest.  I don't think I've ever done that!
The group had a farewell dinner that evening, then we went out for ice cream (Polish word is 'Lody' - we learned that fast!!) and last souvenirs.  I got back around 11pm and then we stayed up late as an attempt to get ahead of jet lag - which I think worked only marginally.

MONDAY we were up early to be on the bus at 6:45.  We headed back for Warsaw to catch our flight.  On the way, we stopped at a church where our bus guide Adam was baptized.  The church was about 400 years old.  It was the last Mass as a group, our swan song.  They had a relic of Blessed Jerzy Popielusko there, a reminder of our first Mass together (which I preached at).  The return trip was very smooth, very comfortable.  I played more cards because the other three were loving it.  It helped me stay awake so I could try to get back on a normal sleep schedule.  Landing in Chicago around 8pm, we got back to South Bend around 12am, so I fell asleep just before 1am.  Back at home.  What a trip.  So many blessings.  Deo gratias!!